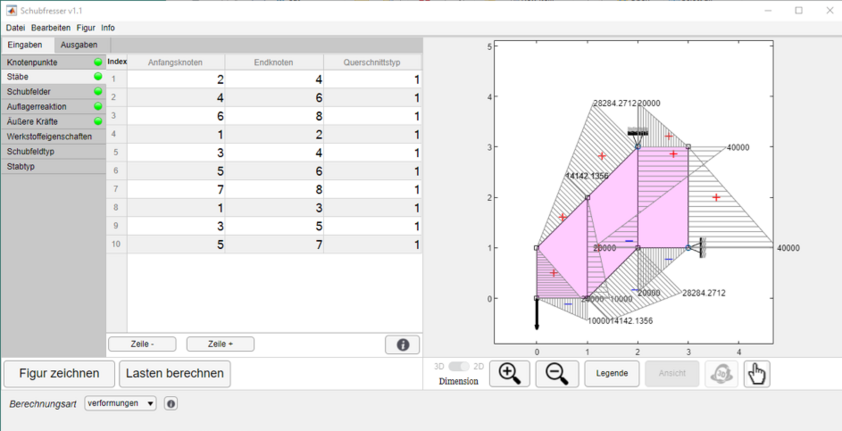 Schubfresser is a calculator for stiffened shear web structures being developed at the Institute of Structural Mechanics and Lightweight Design (SLA) at RWTH Aachen University. It is written in MATLAB and is intended as a help for students studying lightweight design. 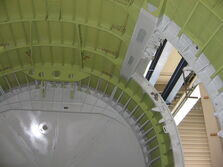 This idealization assumes that the shear webs only carry shear loads, while the bars only carry normal forces. Prof. Dr.-Ing. Hans Ebner was one of its main developers since the theory was first published in the late 1930s. The theory can be regarded as one of the precursors of the Finite Element Method (FEM) which is nowadays used to analyze most structural problems.

Some not implemented features which are still on our to-do list:

At the time being, the GUI is only available in German.

3D structure with bars colored according to their inner stresses

3D structure with bars colored according to their inner stresses

Structure consisting of three shear fields. The normal force distribution in the bars is plotted as well as the tension (+) and compression (-) zones.

Structure consisting of three shear fields. The shear flow in the panels as well as the reaction forces and node displacements are plotted.

Executables for Linux, MATLAB and Windows:

If you have found bugs or have any question regarding Schubfresser feel free to contact us at software@sla.rwth-aachen.de.