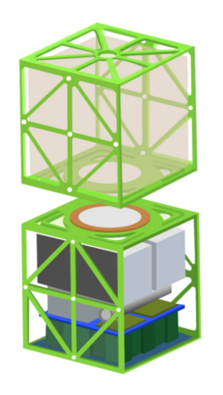 To enable the proper interaction of bus and payload module a multifunctional interface between these two modules is required. This is where the intelligent Space System Interface (iSSI), developed during the iBOSS project at our institute SLA, comes into play. This patented and in the meantime also commercialized interface allows flexible coupling and decoupling of the two modules. In addition to a mechanical connection, the iSSI also enables the transmission of power and data between bus and payload module.

This modular satellite architecture leads to an enormous flexibility throughout all project phases, from design, manufacturing and integration to launch and operation of the system in orbit. In addition, SLOTD4.0 provides cost-effective access to space, especially for in-orbit demonstration (IOD) and in-orbit verification (IOV) payloads.