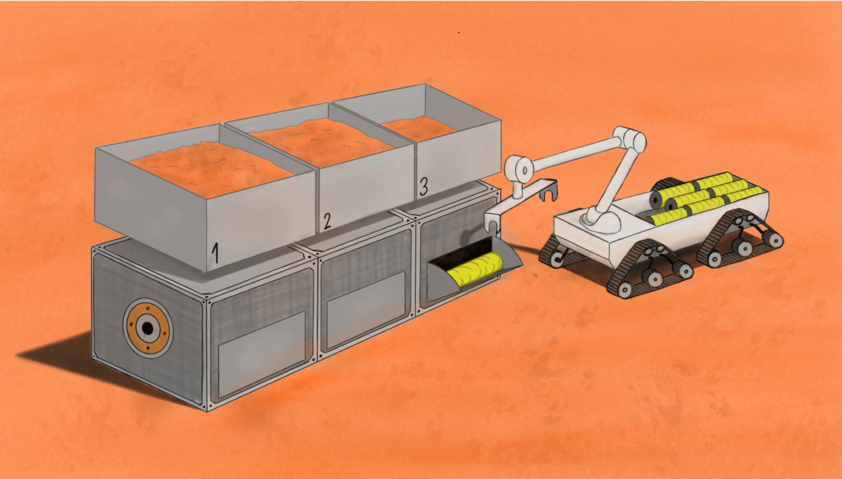 As the so called New Space Age begins, mankind’s interest is being shifted from LEO towards exploring Mars and our closest celestial neighbour – the Moon. Unlike during the Apollo Era, this time the goal is to establish a permanent settlement there. This requires building suitable bases for human colonists. Launching finished habitats for such bases from Earth is extremely expensive and would not allow building a large sustainable colony. Estimated cost to deliver one kilogram to lunar surface with expandable Falcon Heavy is 100000 $. To reduce this high cost of building such a settlement, the in-situ resource utilization is preferred. In order to create a sustainable lunar colony, a range of technologies are needed to solve different issues and a variety of products will have to be produced on the Moon itself. Many of such products can be made using fibres.

As part of the MoonFibre project, we are developing a technology together with the Institute of Textile Technology (ITA) for the production of such fibres from lunar regolith on the moon itself.

Textiles made from basalt are extensively researched and often utilized on Earth. By chemical composition is lunar regolith also basalt. Diverse regolith simulants, representing different regions of the Moon as per Apollo landing sites were created on ITA and continuous fibres as thin as only 17 µm were spun. Thus it was proven, that spinning of the fibres with lunar material is possible and optimal spinning parameters were defined. 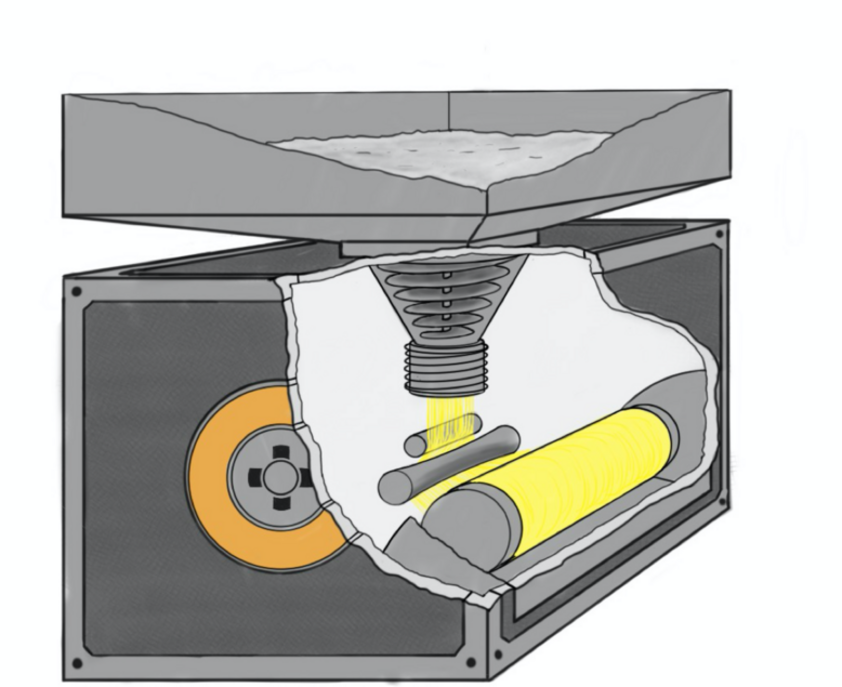 Spinning technology used on ITA involves inserting raw simulant material into a heated bushing with multiple nozzles on its lower side. As the molten material exits the nozzles, it is pulled by a rotating winder, thus creating the fibres. Next goal is adapting this spinning technology to be used in environment with reduced gravity and no atmosphere. This is a daunting task, as both gravity and atmospheric pressure are crucial for the spinning process.

Currently, the SLA and ITA are developing experimental spinning facilities that are to be flown on sounding rockets, zero-G parabolic flights and the ISS. Aim of these experiments is to test and validate different concepts, of how fibre spinning process could function on the Moon.

The long term goal of the MoonFibre project is to create a large scale fibre-production facility on the Moon that would only need raw material and power as inputs. It would be comprised of multiple cubical units coupled together through suitable interfaces, thus being able to share computing and electrical power as well as the thermal management system. However, each of the units would be able to function independently if needed. This approach allows high redundancy and easy scaling of fibre production, as the facility can be easily expanded by adding additional units. Moreover, by creating multiple units, their production costs would be minimized. Many of the components for such a facility are already under development on SLA.

Once there is a supply of continuous fibres on the Moon, different resources can be manufactured from them such as wool, non-woven material, textiles, short and continuous filaments. These can be utilised on variety of ways while constructing the Moon village.

Wool material and non-woven products can be used for filtration, soundproofing or hydroponic growth mediums. Combining this wool material, short and continuous fibres with already well researched 3D-printing with lunar regolith, a much lighter habitat structure can be constructed, thus allowing more complex structures to be built. Textiles can be used for clothing, production and repair of EVA suits, medical equipment or for creating ropes and cables. Only some examples are mentioned of what could be achieved using the MoonFibres and it is within the scope of the MoonFibre project to validate these and many other use-cases by producing said resources and testing their physical properties. As this technology complements all other plans for exploration and exploitation of the Moon and its resources, it is expected that other entities will find additional ways to implement the MoonFibres into their concepts as well. This is why this the MoonFibre technology is a unique contribution towards achieving sustainability and growth of the future lunar settlement. Developing it would benefit the textile industry on Earth and it could just as well be used on Mars, where demand for fibre-based material might be much larger.